In past times; this area used to be the center for piracy. The pirates had their home ports in the Pulau Gedung Hills, Gua Lanun (Pirates' Cave) and Batu Perompak (Pirates' Rock) on the island of Pangkor. Many ships/boats were taken over and robbed of their goods and products. The Dutch were active here in the times of the Dutch East India Company (VOC). People were especially keeping themselves busy with the tin industry, until the British took over. In 1670 the Dutch built a fort (also for protection against the locals and the higher powers of that time) at Tiger Rock. During the British rule the name has temporarily been Monkey Island. Later the island was named Pulau Aman (Peaceful Island) before it regained the name Pangkor.
​
The ancient name for this island is Spirit Island. The ancient islanders believed that this island is protected by the spirits of "Keramat Serban Hijau", "Keramat Serban Kuning" and "Keramat Tok Janggut". Fishermen claim to hear voices chanting verses from the Holy Quran and smell incense from the uninhabited Pulau Gedung hills. The origin of the inhabitants is unknown. The island was frequently visited by pirates roaming the seas around the island. They robbed boats with commercial goods plying from Kedah to Perak and vice versa. The pirates hideouts are on top of Pulau Gedung hills. This place till this day is known as Gua Lanun (Pirates' Cave) and Batu Perompak (Pirates' Rock).

The Dutch were invited to the tin rich state of Perak as a deterrent to the ambitious Ayudha ruler and Thai invasion. They remained in Pangkor Island (Pulau Pangkor) until the threat from the Thais diminished whereupon Perak once more asserted its independence. The Dutch monopolised the tin industry until the arrival of the British. During their tenure on this island and due to the opposition by the locals, a fort was built by the Dutch 1670, at the entrance of Tiger Rock. With the arrival of the British in 1800 the island was renamed to Pulau Kera (Monkey Island) . This was due to the abundance of monkeys on the island. The islanders opposed this name. The British were pressured by the village Headman Penghulu Mohd. Noordin b. Mastan to rename it Pulau Aman (Peaceful Island). It was named Pangkor soon after. One famous treaty signed on Pangkor Island (Pulau Pangkor), known as The Pangkor Treaty was signed in 1874 between Sir Andrew Clark, principle Perak chiefts & Chinese headmen agreed on the acceptance of the 1st British Resident.
​ 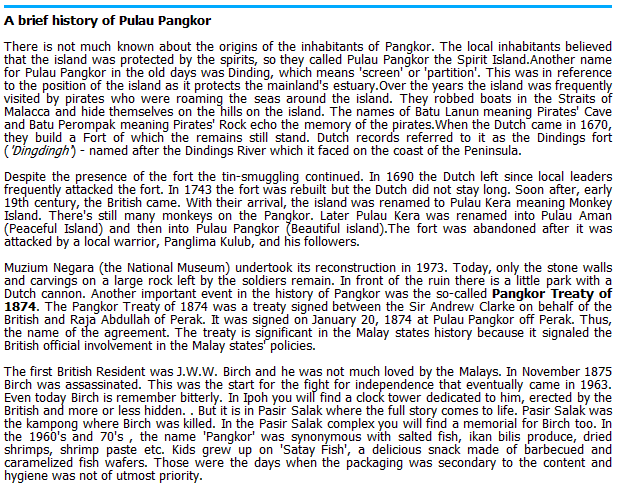 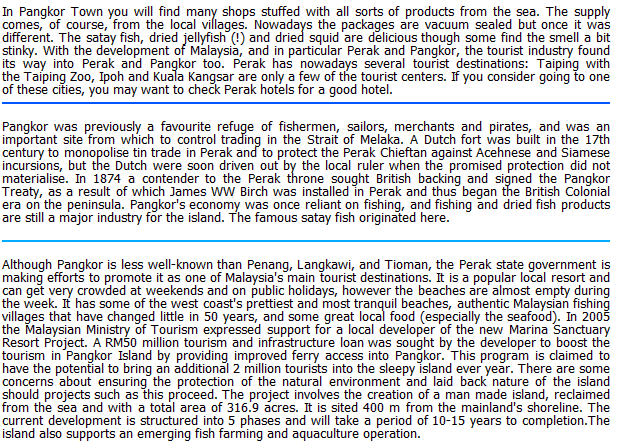 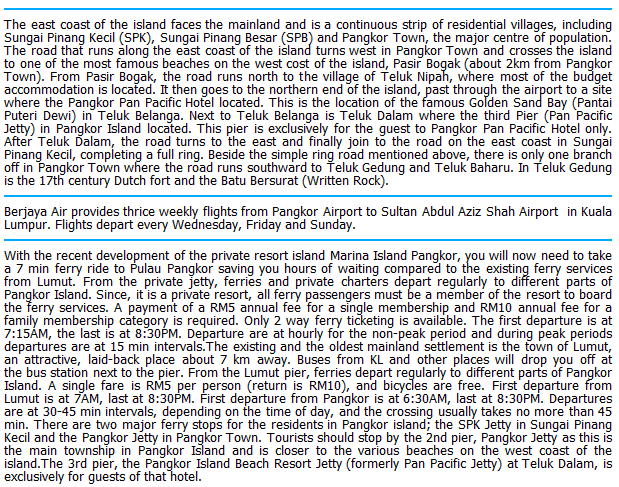 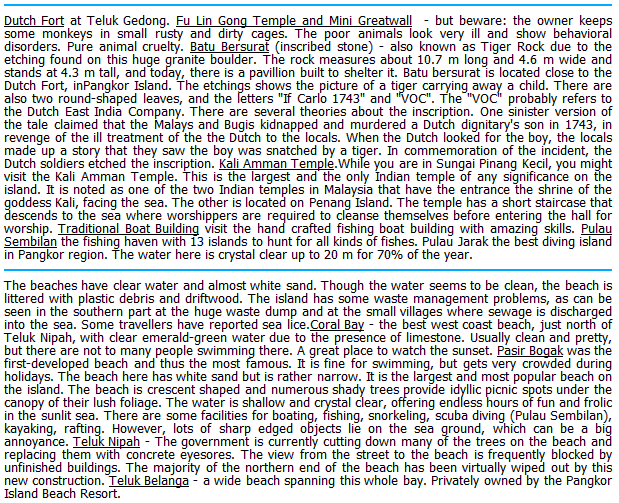 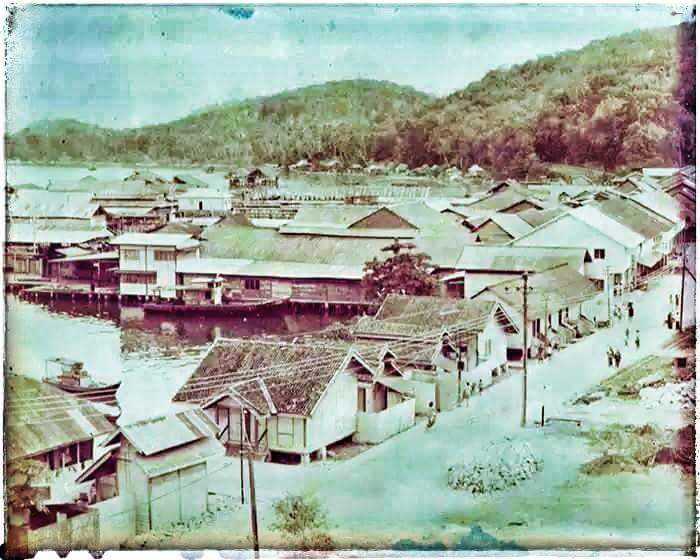 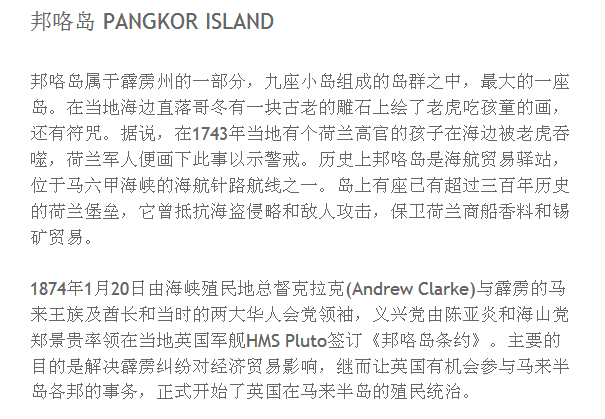 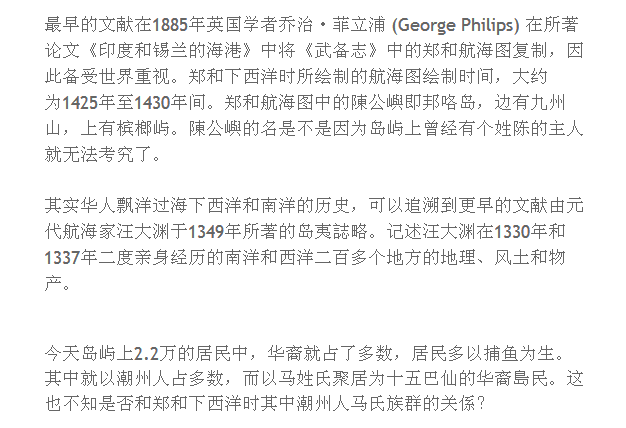 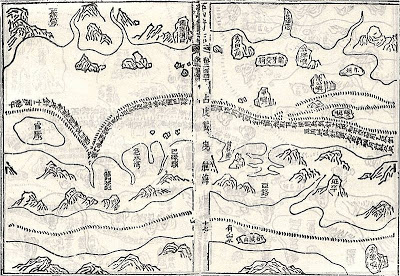 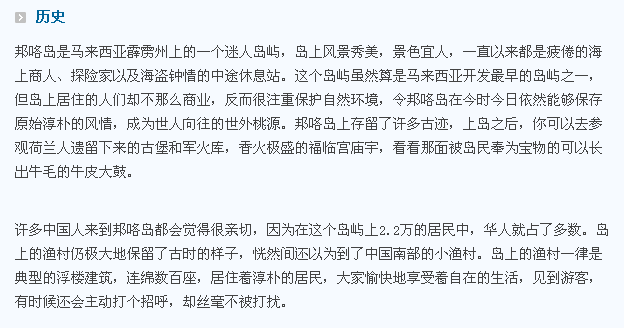 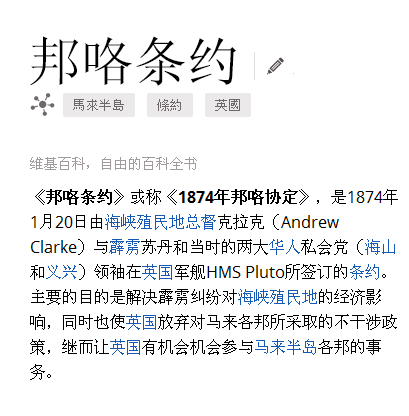 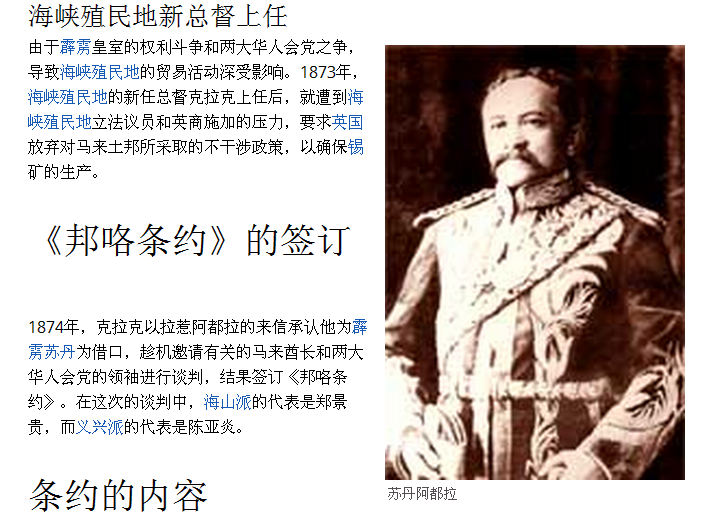 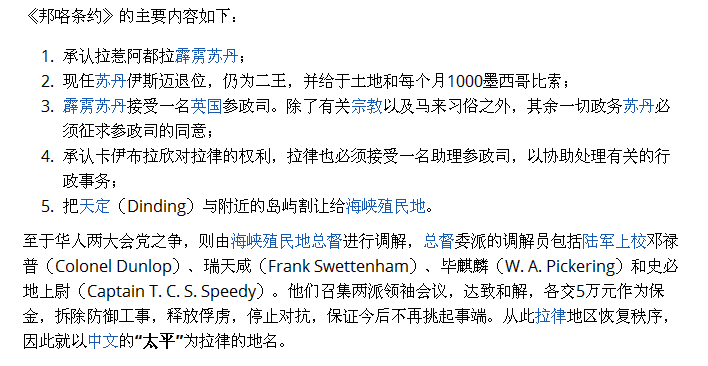 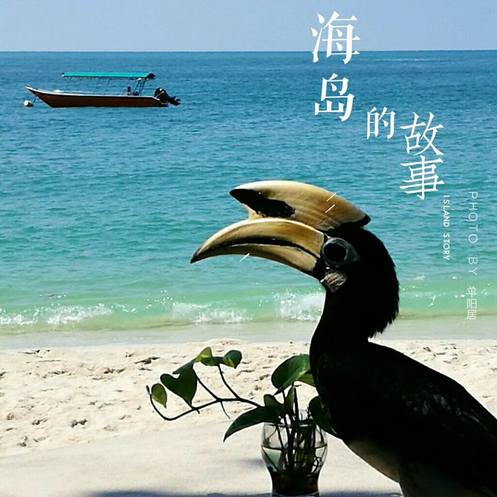 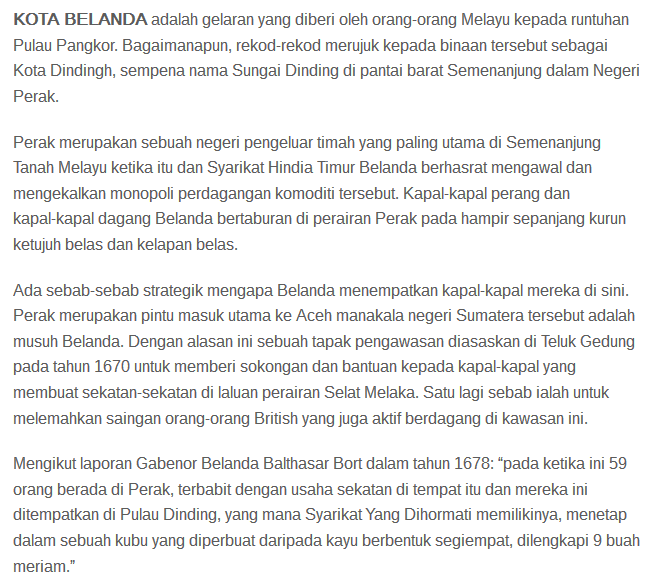 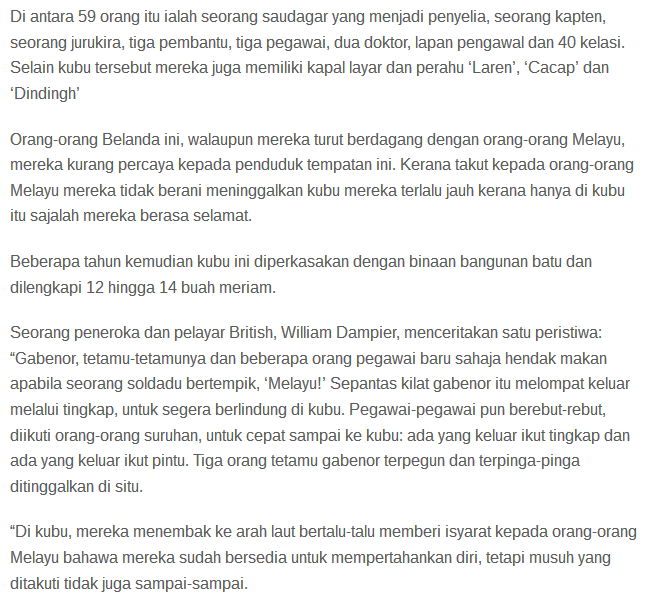 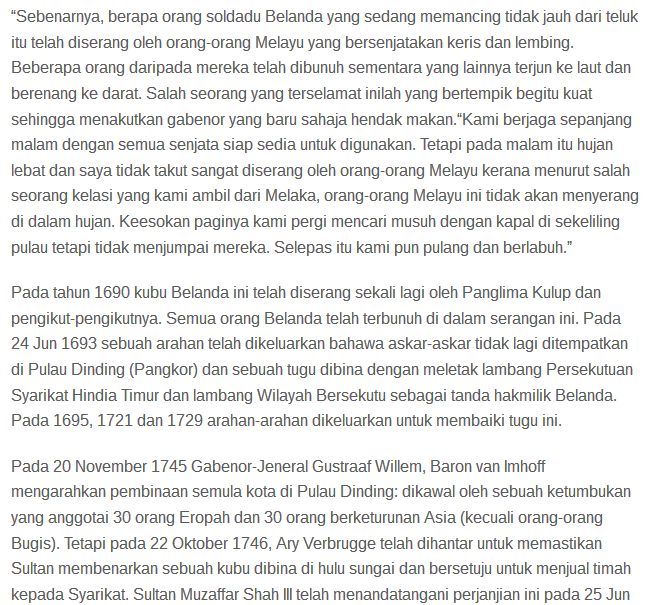 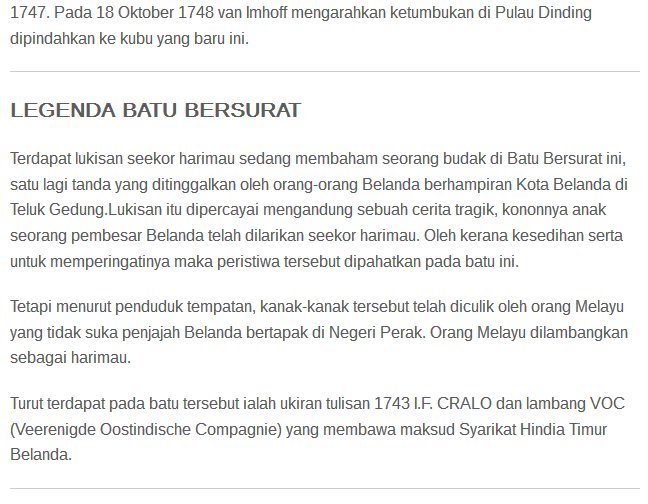 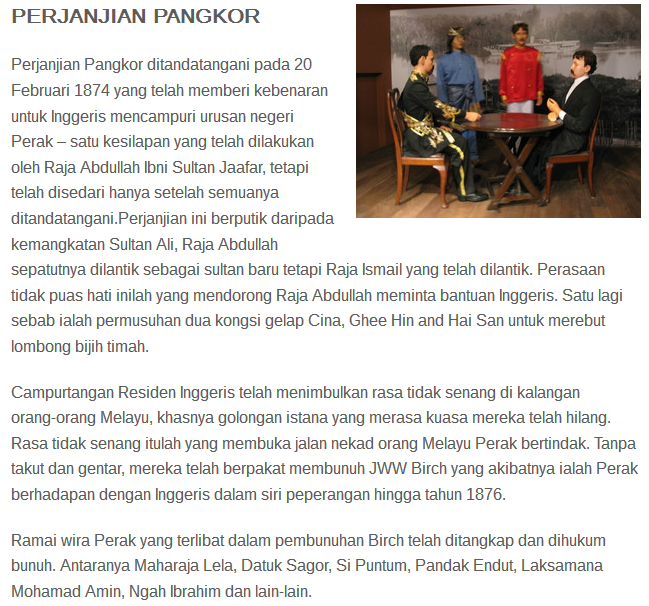 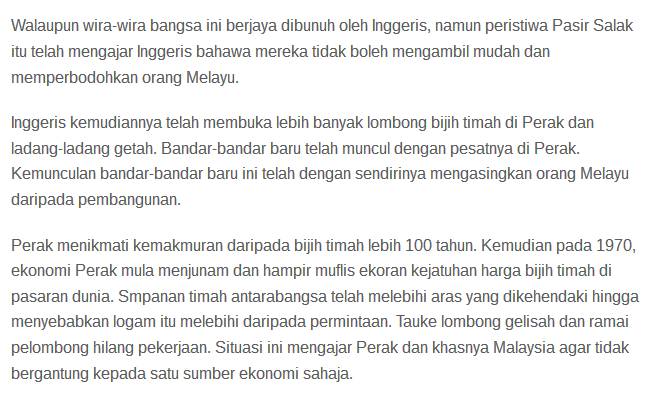